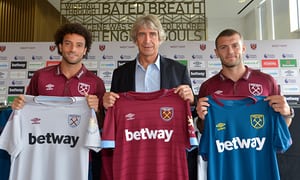 The end of last season allowed us to enjoy a safe win against Everton. Safety was assured before the final game and after that, we could look forward to the summer off and a World Cup which more than exceeded expectations. England made it to the semi-finals, eventually finishing fourth. With a very hot summer to go alongside it, English football was back in the hearts of the nation.

So, with the World Cup done and dusted and pre-season back under way, West Ham fans all over were getting ready for another summer of near misses and worrying performances against lowly teams that have gone on to define how our seasons have gone. Before the World Cup, David Moyes could have been our manager and the promises that were never kept would stay as failed ambition. More of the same beckoned for the Irons’ faithful. More drab, unexciting football whilst barely scraping survival appeared to be on the horizon again. But this time, it feels different. Out went Moyes, in came Manuel Pellegrini. Out went a failed manager from a team in Manchester, in came a Premier League winner from a team in Manchester. With Moyes gone, so was the five at the back with no support up front. Gone were the signings of obscure championship strikers just in case we were relegated. Pellegrini came in and laid it bare for the owners. Its going to be his way, or the highway. There is already so much to talk about with him at the club.

Firstly, the signings he has made. As of writing, there have been seven signings made, with the promise of more still to come. Potentially. From free transfers like Ryan Fredericks and Jack Wilshere (a real statement for the club) to huge spends like Felipe Anderson and Issa Diop, it feels like Pellegrini has looked at the squad and decided what is needed to get us from a good team, to a good squad. The players already mentioned have the chance to be good players for West Ham and those not mentioned could turn into real bargains. Andriy Yarmolenko, signed for under £20m, is one of those underrated signings who could well be one of our better players this season. Fabián Balbuena, a player I had certainly never heard of, coming in for around £4m could prove to be one of the best signings we make in terms of outlay. And last, but certainly by no means least, is Łukasz Fabiański. We needed a replacement for Joe Hart and he should be able to provide the competition for Adrian to be at his best. So far, all the signings made seem to fit a structure. Pellegrini is almost certainly a catalyst for that.

Pellegrini has already made himself heard about changes behind the scenes as well. News that he is unimpressed with the training facilities will have come as a surprise to no one. More surprising is that both managers before him were seemingly content with them. The portacabins will soon see some improvements which will only benefit the team. Getting the young players in training with the first team will surely aid in their development.

Declan Rice. So often used at centre-back last season in a very impressive first year, is one of those former youth players who has taken the step up recently. In vast contrast to Reece Oxford, who could yet leave the club, he has only improved with each performance. The mistakes from last season will only improve his playing ability and he also has a few caps for Ireland already at such a young age. His attitude has been exemplary and hopefully he and the club will sort out a contract which is fitting of how important he will surely become.

Oxford is one of the players who could be leaving the club. Pellegrini appears to not be entirely impressed with his behaviour and seemingly, neither are the fans. It’s been an adage of West Ham fans that if you put the effort in, the fans will love you. Oxford burst onto the scene when he pocketed Mesut Ozil as a 16-year-old but has never since put in that level of performance. It’s a shame, as he had the potential to go on and be a fixture in the side for years to come or joined one of the top six clubs. It’s not quite Ravel Morrison, but it is still a case of “what if?” with Oxford.

Further players could yet leave before the window closes. Cheikou Kouyate is one fans seem to be okay with selling, with Sam Byram and Jordan Hugill also on the way out. These three are players who have had varying degrees of success, Byram has been haunted by injury whilst Hugill should never have been bought in the first place. Moves to championship teams would suit them well. Kouyate on the other hand, has had some fantastic seasons for us, but over the last couple of years has appeared to struggle with his role in the team. Moving him on would benefit him as a fresh start at a new club is possibly what he needs. Players such as Andy Carroll and Winston Reid, should be moved on as quickly as possible. They will be here for at least half a season, but injuries have left them missing far too often and again, a move elsewhere for either of them, either in January or the end of the season will do them good. Pedro Obiang is being linked back to Italy, but until something concrete is decided, I’ll let people form their own opinions.

There are players we had expected to leave as well. Robert Snodgrass and Michail Antonio were touted as players who could leave but over pre-season, both have had their chances to impress the new manager. Antonio started his first game against Villa and appeared to be somewhat back to his old self. His strength and ability to finish a good run at the defence is something we haven’t seen from him in a while. The same must be said of Snodgrass, who also scored against the Villa team he was playing for less than two months ago. Personally, I have been massively surprised by the Snodgrass that has played under Pellegrini. It is nice to finally see a smile on his face and enjoying being at the club. After Sullivan blamed him for the troubles on the pitch, it felt like curtains for Snodgrass. I always wanted him to get a second chance under a new manager and he could go on to do a Stewart Downing, who worked hard and got the fans on his side. I’d love them both to stay, but time will tell with either of them.

All these factors, the new manager, the new signings, owners who have finally backed a manager by spending money, the changes behind the scenes and the style of play so far has this fan quietly hopeful for the new season. Yes, it was only pre-season. Yes, it was only Aston Villa. But having watched the stream on YouTube, (lots of thanks to Villa for putting it up, seems we need to sign their media guy!) the difference in style from just a few months ago is staggering. The team looks fit. The new signings are already showing what they can do, Arnie is on fire (will defences be terrified?) and could carry on where he left off. Already, we look to have some selection headaches for the new season and it’s a welcome headache to have. We have been crying out for the West Ham way ever since we left the Boleyn and it looks like we might get it. It won’t win us the league, but it might win us a trophy and now, that would be the dream scenario.