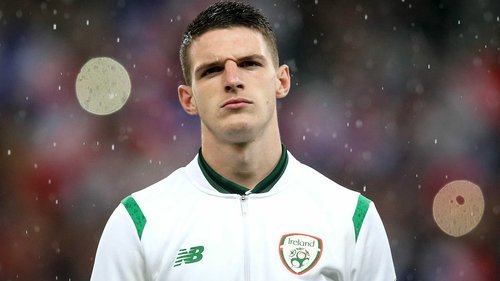 On Wednesday Declan Rice released a statement, via his twitter account, indicating he had submitted a request for his international registration to be transferred from Republic of Ireland to England.

Finally an end has been put to this saga dating back to September when he ruled himself out of selection for the Republic of Ireland’s Nations League game versus Wales.

Back then I wrote a blog on Rice’s dilemma and it is still pretty much applicable in regards to his prospects regarding opting for England.

As of yet Rice hasn’t been called up by England, something he is not taking it for granted.

It will be interesting though to see if Rice gets a call up to the upcoming England Euro Qualifier matches in March.

In my previous blog I detailed a list of players Rice will need to oust from the squad. Reports suggest that should Southgate call him into the setup, he sees him as centre back as opposed to the defensive midfield role. A role he is currently excelling at. A strange choice by Southgate in my opinion.

Currently, I would see him easily slotting into the defensive midfield role ahead of Jones, Henderson, Dier or Loftus-Cheek. Rice is only 20 years of age but in the last 6 months or so, he has grown in stature. He is way ahead of the years his age suggests, and he will only get better.

I, myself, as a proud Irishman, can’t help but feel a little disappointed by Rice’s decision.

I had high hopes of watching him represent my country at senior level and leading them into major tournaments.

There is no better feeling than seeing a West Ham player line out for my country.

In my time I have managed to see players such as David Kelly, Chris Hughton, Gary Breen, David Connolly, Robbie Keane, Joey O’Brien & Darren Randolph. Yet none of these ever filled me with the same pride I had in seeing Rice in the Green and White.

I have no doubt Rice was just as proud to wear the Ireland shirt due to his family heritage and that this was a difficult decision for him. A decision he has thought long and hard about.

Rice stated in his press release that it was a personal decision made with his heart and his head.

Those such financial benefits may only come depending on how far he progresses. Could he possibly be a future England captain? Who knows?

I just hope his progression doesn’t include submitting a request to be transferred to another club in the same way as his international registration!

One thing for certain is that Rice won’t let this phase him. He will continue to learn and improve each and every game. And I will continue to support him in his footballing career. Well, only for as long as he wears the claret and blue!