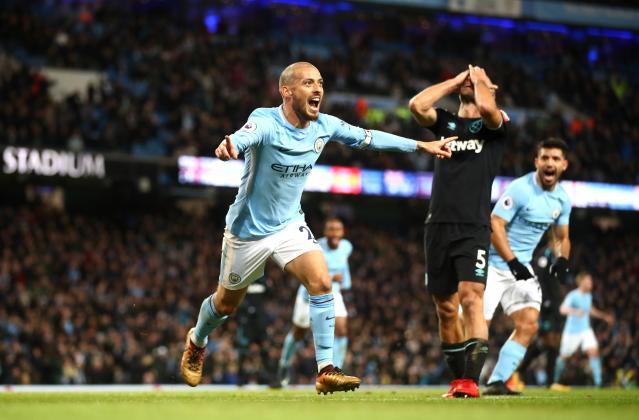 LATE HEARTBREAK FOR THE HAMMERS

West Ham come away from the Etihad with 0 points against one of the hottest teams in Europe, but there were plenty of encouraging signs for the boys in claret and blue.

The match began as expected, Manchester City having plenty of the ball but the visitors set up to be resilient.

The first 20 minutes of the game were encouraging for the Hammers as City did not pose any real threat.

Adrian did well to keep out a deflected effort from Kevin De Bruyne, but it was West Ham who had the best chances of the first half.

Manuel Lanzini thought he put the Hammers ahead, but an excellent save by Ederson kept the score level.

However West Ham took a deserved lead on the stroke of half time, after a wicked delivery by Aaron Cresswell found Angelo Ogbonna, who headed past Ederson.

The second half began as the first half did, West Ham determined to keep City at bay.

City’s first goal came in a controversial manner, with Fabian Delph blatantly diving to win a free kick, which the home side then went on to score from when Nicolas Otamendi poked the ball past Adrian from close range.

The Hammers began to tire, but West Ham had a great chance on the counter and Michail Antonio saw his effort saved by Ederson with ten minutes left on the clock.

City then showed their class with seven minutes remaining after De Bruyne’s excellent chip over the top found David Silva, who volleyed the ball on the stretch past Adrian. Heartbreak for the Hammers.

The visitors came close to gaining a deserved equaliser, but Diafra Sakho’s effort went just wide of the target.

Every West Ham fan will be encouraged by this performance, and if they continue to play the same way they did today, there should be no concern of relegation at all.

West Ham sit 19th in the table and host Chelsea at the London Stadium next Saturday, meanwhile the league leaders Manchester City face a trip to Shakhtar Donetsk in the Champions League midweek.