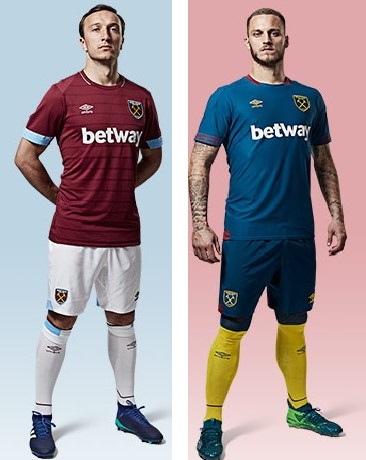 The new Home and Away kits were unveiled today with a proliferate of West Ham Legends and Carlton Cole (only joking, I know he is a legend – albeit for mainly jesting reasons).

Gone are the days when you eagerly awaited the weekly Shoot magazine to see if your club had released the kit. Then there was the unveiling during the last game of the season to which us across the water had to buy the Sunday newspaper in the hope there would be some photos accompanying the match report just to get a glimpse.

Then there was the cringeworthily awful presentation ‘live’ feed. Good God how bad was that!

Now (thankfully) it is just a quick look on the internet on the morning of the release date and it can be seen in all its glory.

We had a sneaky peek at the back of the kit at the unveiling of Pellegrini. Not really that much different here in regard to previous kits. We have the mainly claret top with a small blue trim on the sleeves, white shorts and white socks. I quite like the detail of it, it’s akin to our kit from our 85/86 season (the year I started supporting the club) and our more recent 2014/15 kit (my favourite in the last number of years).

Now this is something completely different! In my time supporting the club (see above – 33 years for those not too good at maths) I don’t think I ever remember a kit this colour. Some fans are already up in arms about it breaking with tradition, yellow socks etc. but I quite like it. It is different. It also means I’m not spending a fortune on kits for my son and them looking much the same as the previous season.

A full new kit will set back an adult (if you want to be a full kit w**ker) £98.00 without any name or number. With a name and number it’s £113. And if you really want to look the part and get the Premier League sleeve badge its £118. It’ll set you back £55 for just the short-sleeved version, an extra £15 for name and number and an extra £5 for the Premiership badge!

A full new kit for a kid is £80 without any name or number. With a name and number it’s £101 because for some reason the badges cost £6 and not £5 on a kid’s shirt! For just the shirt it’s costing £45 for the short-sleeved version, an extra £15 for name and number and the £6 for the badge.

My biggest gripe about spending that money on a child’s replica kit is that it’s not a ‘replica’ kit. Replica means copy. But the club can’t put the sponsor on the child’s shirt due to it being a betting site. I don’t think wearing an AVCO kit in my younger days made me want to take out a loan. Or Dagenham Motors made me want to drive a FORD but the culture to blame appears to dictate this.

Anyway, hopefully Aston Villa get promoted in the play-offs just so I can justify spending that sort of money on my son’s away kit that we might wear more than once or twice a season!