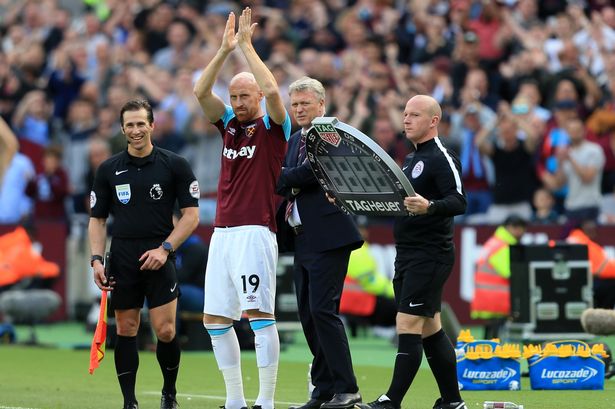 Following on from Jack’s blog @myWHUopinion

I would like to put the counter argument on why resigning James Collins would be a backwards step.

Firstly, I want to start by saying that James Collins was a great servant to West Ham.

And if there is an opportunity for him to coach in the youth setup then it would be excellent to bring him back into the club.

But resigning him as a player is in my opinion a backwards step.

In terms of starting appearances in the premier league last season amongst our recognised defenders:-

Collins was not a major part of first team last season through selection and injuries.

I think a lot of supporters think he played most of the season.

He is now 35 years old and did not go through a pre-season. How long would it take him to be match fit and even then, how long would he be able to maintain his fitness for?

By the time he was match fit then i would have hoped that Pellegrini would have found his preferred centre back partnership and they would have settled in.

There also seems to be a rush with some supporters to go back to the defence from last season.

We have to remember that last season we had the joint worse defence in the Premier League. This was also with a Manager in Moyes with a defensive style.

I also hear many fans rate all our defenders from last season as well as Collins.

But If they were all that good, then why couldn’t they defend as a 5 with a defensive manager who’s style was to keep 9 or 10 behind the ball?

We desperately needed new additions added to our defence to bring in pace and reduce the age profile. And the manager brought in Fredericks, Diop & Balbuena.

Pellegrini’s defensive style is normally a back four with attacking full backs. For this style of play you need pacey full backs and quick centre backs that can cover ground.

Zabaleta can no longer play this way and Fredericks fitted the style well.

Masuaku can provide the pace on the left side although there are still doubts on his defending.

When we need a more defensive approach away from home he could use Zabaleta & Cresswell.

On to the centre backs

Reid is injured and not looking good for the season.

So our options for the 2 centre backs positions are Ogbonna, Diop, Balbuena and Rice without looking at other players around the squads.

What would Collins give us above these players?

His best attributes were:-

Aerial Ability – Collins leading stat was aerial clearances, but Balbuena has already started the season achieving some good stats in the this area. With his size Diop should also be good in the air.

Leadership – Collins was a leader on the field but both Balbuena and Diop have come to us as previous club captains so should be able to bring a leadership to the team. And Declan Rice is talked about as a future captain.

Speed – How would he cope in playing in a back four that also needs to cover for advancing full backs?

What I can remember of the last couple of seasons when he played in a back four was that he looked vulnerable.

So beyond a sense of looking back with sentimental feelings then Collins would not bring anything to a Pellegrini team.

We are three games into a season and have changed our defence each match.

We need to get a settled defence as quickly as possible and give the players time to get to know each other on the pitch.

It has always been accepted that the hardest 2 positions to bring into a team is a goal keeper and centre back. This is mainly due to the fact that mistakes often result in a goal. Other new outfield players normally get more time to impress.

The four centre backs that we have on our books should be able to give us what we need but if they don’t then it is improvement that we will need in the January window.

Going back to Collins would not in my opinion improve the team or squad, even on a short term basis.

This new era under Pellegrini may take time for the players to settle in as we have brought in a lot of players due to the previous two seasons of poor transfer windows.