The story of the Hammers’ immediate return to the Premier League 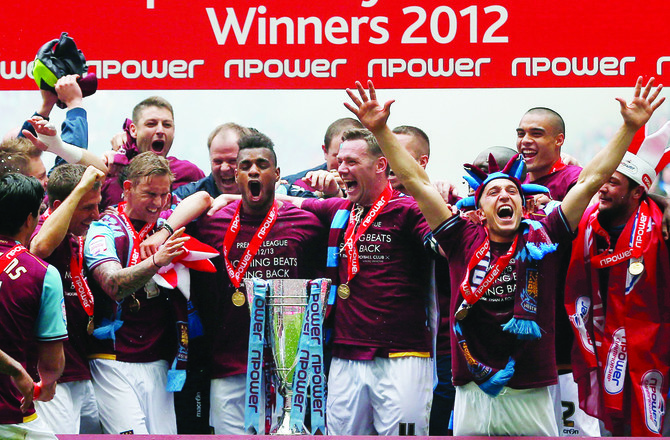 A 3-2 defeat to Wigan Athletic on 15 May 2011 brought to an end a six-season stint in the Premier League and saw the Hammers relegated to the Championship for the first time in seven years.

It took two seasons to regain our Premier League status following relegation in 2003, but this time our return would be much swifter. Let’s re-live the 2011/12 campaign that saw Sam Allardyce lead the Hammers back to the top level with victory in the Play-Off final.

Today the Championship is arguably more competitive than ever with teams like West Brom and Leeds leading the way, and they were the favourites for promotion in the Championship betting prior to the break. There are also the likes of Brentford, Fulham, Nottingham Forest, Preston and Bristol City in a race to stay in the play-offs.

It was pretty competitive back in 2011/12 too, with Reading and Southampton spending big, and the likes of Cardiff, Middlesbrough and Leicester all gunning for a top six finish. It was far from plain sailing for the Hammers.

Allardyce was appointed as Hammers boss on 1 June, replacing the sacked Avram Grant. The former Bolton and Newcastle boss did business in the transfer market in his first month, renewing fond acquaintances with Kevin Nolan and adding Abdoulaye Faye from Stoke. Those captures were followed by the addition of Bolton’s Matt Taylor and Joey O’Brien, as well as Aston Villa’s John Carew.

The major refresh appeared to have worked, with the Hammers overcoming an opening-day defeat to Cardiff to take 16 points from the next 21 available. We were well in the title picture as December approached.

Christmas and the new year

The Irons suffered back-to-back defeats for the first time at the start of December, losing out against Burnley and Reading, which set Allardyce’s ambitions back. Four wins from the next six helped keep West Ham in the automatic promotion picture.

The new year started with three consecutive wins, but a heavy reverse at Ipswich on 31 January dealt a major blow. The players did bounce back, outmuscling Millwall five days later, but seven draws in the next nine saw opportunities to take a stranglehold on the title race missed.

<blockquote class=”twitter-tweet”><p lang=”en” dir=”ltr”>Bumped into our Play off winner Ricardo Vaz Te training at Chadwell Heath, what a charming man. Will we ever forget his winning goal against Blackpool at Wembley in May 2012. Good luck Ricardo. dg <a href=”https://t.co/3aGQdzRX3N”>pic.twitter.com/3aGQdzRX3N</a></p>&mdash; David Gold (@davidgold) <a href=”https://twitter.com/davidgold/status/1093971435964502021?ref_src=twsrc%5Etfw”>February 8, 2019</a></blockquote> <script async src=”https://platform.twitter.com/widgets.js” charset=”utf-8″></script>

The run-in and play-offs

Five wins from the final eight games of the league season, and just one defeat, at home to Reading, saw the Hammers just miss out on automatic promotion, with the drama of the play-offs ahead of us. The semi-finals went as perfectly as you could hope as Cardiff were thumped 5-0 on aggregate.

The final would see the Hammers face Blackpool, who we’d thrashed during the regular season, but the Wembley showpiece would be far from as straightforward, and Carlton Cole’s goal on 35 minutes was cancelled out by Thomas Ince’s strike just after the restart.

It ensured a nerve-racking finish to the season for both teams and laid the platform for Ricardo Vaz Te to pop up and hammer home a loose ball in the 87th minute to win it for the Irons. The strike sparked jubilant scenes and ensure that West Ham’s latest absence from the Premier League would be a temporary one