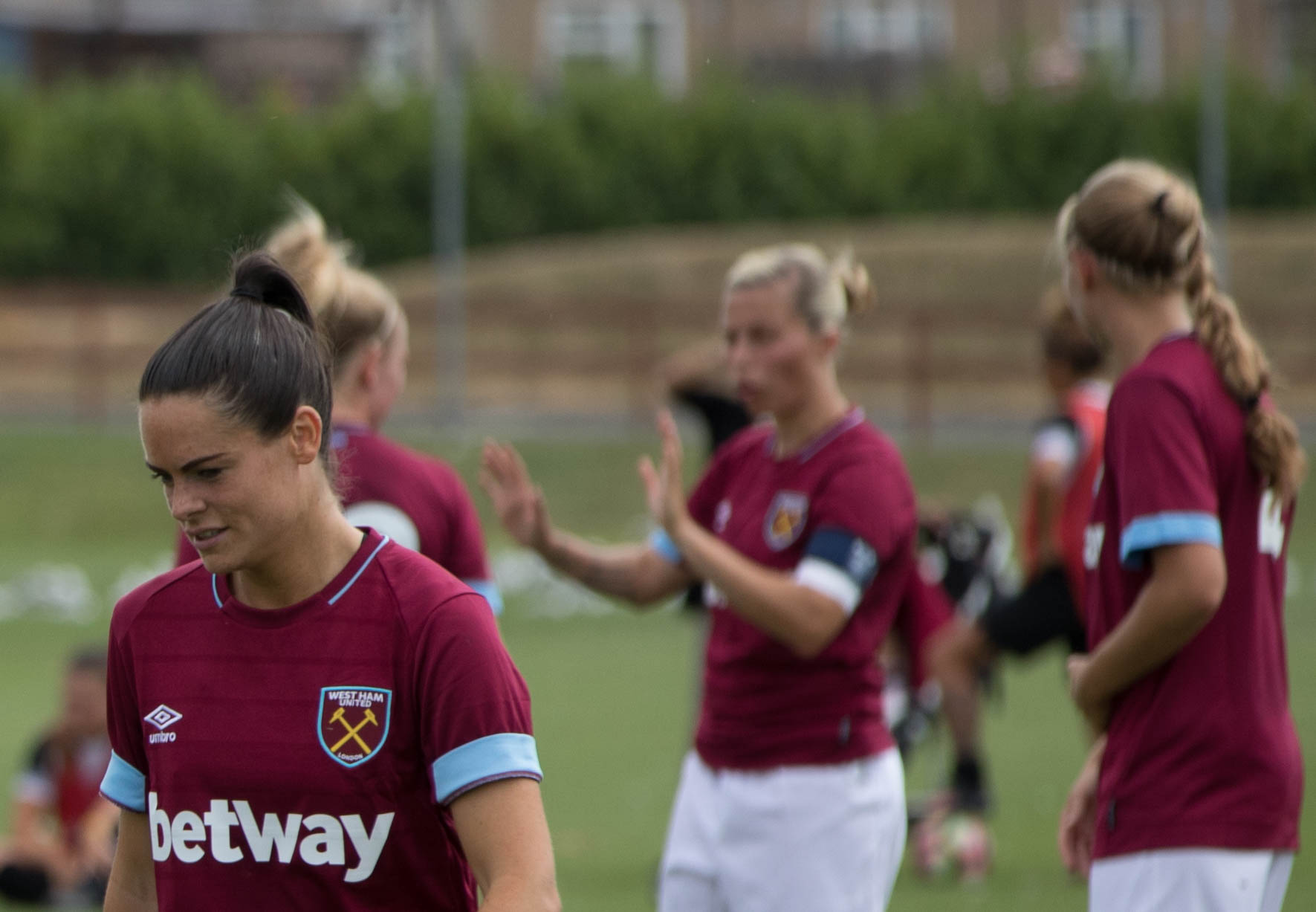 West Ham United Women nee Ladies kicked off their pre-season friendly itinerary with a trip to The Hive to face London Bees. There was a buzz of anticipation about the place as the crowd, roughly the same number as a WHUW home game, gathered to see history being made.

A maiden voyage of sorts  ….. on the ship of Theseus.

Not one of the fresh faced eager players from last season’s August team photograph had survived the move from the third floor to the penthouse suite of the WSL, but this was still West Ham Ladies. It doesn’t matter who wears the claret and blue, team is everything.

Romantics will hark on about past glories and their inglorious past, get dewy eyed about playing over a park with one lino and skidding in dog’s muck or maybe reminisce over their recyclable football shirts (either they had a lot of players called Headley or the Headley shirt was a very popular size).

The purists would say they would like to see a team evolve and develop by winning titles and proving themselves to be the best in their division.

However West Ham United Women’s speedy boarding pass had negated the need for any of that and now they were teetering on the edge of possibly their most historic/successful season ever…… in the WSL.

As a fan with an uncanny inability to retain players names, I had my work cut out. The starting eleven had eleven new players in it. Ten plus a trialist. The trialists are never named although apparently anyone who knows anything about women’s football would easily recognise West Ham’s trialist number 6.

Unlike the glut of bizarre trying to be trendy promo videos by media teams who’ve just discovered Final Cut Pro X’s special effects menu that have been doing the rounds over the past few weeks the two teams sauntered onto the pitch like normal everyday people out for an afternoon stroll. No razzmatazz, no fanfares. Just quiet confidence.

I tried to imagine what new manager Matthew Beard and his generals would hope for or glean from this first run out. No injuries would be first on my list. Attitude, temperament and communication perhaps. It’s always nice to win but the result would be superfluous. There was a squad of sixteen players. If that was the full squad then their training matches would have only been 8 a side at the most.

To almost quote the over used cliche, the match was a game of three halves. Three thirty minute halves to be precise. The first belonging to the Bees as they showed their Championship pedigree and inflicted the first West Ham Women’s goal conceded, a beautiful finish from Taylor OLeary, and some excellent silky skills from their No.4 (sorry ..don’t know name)

The second belonged to the Hammers as Leanne Kiernan showed that she has an eye for goal, slotting in West Ham Women’s equaliser past the Bees keeper from close range.

The third half belonged to the conditions as the heat  slowed up the play, which suited West Ham, as they began to find their WSL  passing range and rhythm.

A solid performance from the West Ham defence where Hendrix was the ball winner and  Flaherty mopped up and spread the ball. Not too much created up front but signs that once they acquire a better understanding of each other the goals will come. A special mention for Brianna who caught the eye and gave an all action performance in very difficult conditions.

It was also refreshing to see manager Beard kicking every ball and feeling every tackle from the sidelines, whilst barking orders to his players in no uncertain terms with a couple of ‘Oi ref!s’ thrown in for good measure….