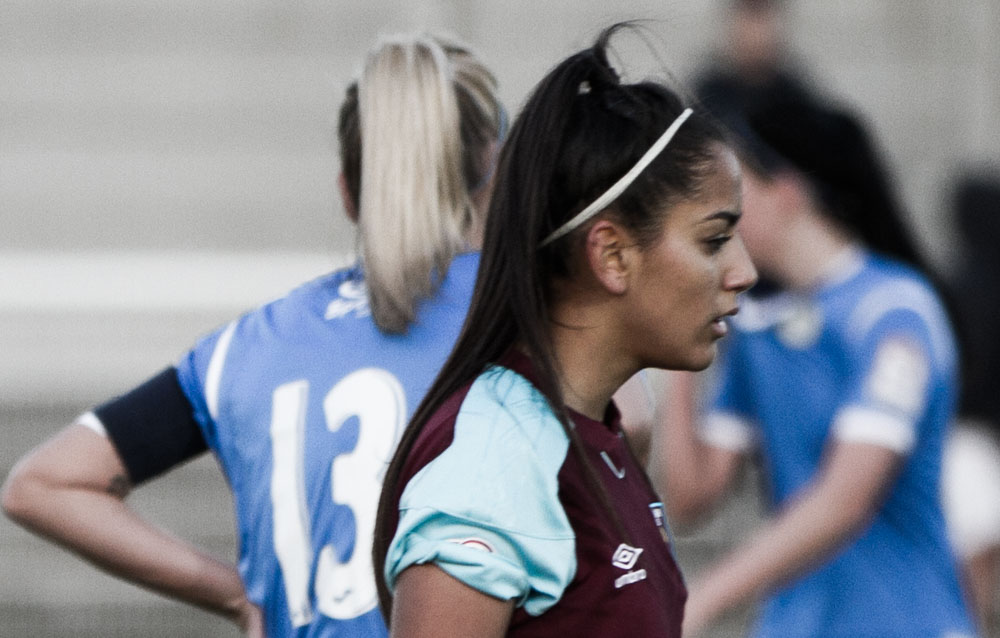 We all make mistakes. I made the first mistake when I was tricked into thinking ‘mmm ..it’s not all that cold out’ by the low deceptive winter sun and proceeded to reject my insulating quilted jacket for some flimsy permeable thing hanging in the porch which had as much resistance to the bitter biting wind as a string vest with a hole in it. The mistakes that followed were to cost West Ham United Ladies dearly.

But first the positives.

Zoe Swift and Ellie Zoepfl had auspicious home debuts, Ellie scoring a magnificent goal from just outside the penalty area and Zoe with two assists, one of which she pulled the ball back from the byline for Molly Peters to ping it into the net. This was a new one on me. In all the games I have witnessed West Ham Ladies play, this was the first time I had actually seen a player reach the byline and pull the ball back across the goal.

West Ham Ladies scored three times against a very mean Basildon defence, only the second team this season to achieve that stat.

West Ham Ladies were fit. Super fit. Josh Ewens has got them in tip top shape … not a hands on hips in sight.

The pitch was in perfect condition. The stadium had all the trappings befitting a WSL team. Excellent facilities (I recommend the the toilets if you want to keep nice and warm) professional catering, turnstiles, stewards from the days at Upton Park (very helpful and friendly) a beautiful stand and a car park to boot.

After the Lord Mayor’s show of the family fun day with it’s just over a thousand crowd I was half expecting a ‘manure’ cart of an attendance for this one, but there was a healthy 60+ watching the game, which was pretty good considering the artic conditions and a distinct lack of face painting.

It was a mouth watering local derby. C&K Basildon Ladies had rolled into town in a rich vein of form and West Ham Ladies were hoping to continue the ‘on and off the pitch’ success of their last home fixture against QPR. Jay Blackie (ex-West Ham) is their playmaker. Everything revolves around her, whether it be by accident or design, and if you mark her out of the game the apple cart will not only be upset, the apples will be rolling around all over the show in total disarray. West Ham Ladies however made the schoolboy(girl?) error of not doing their homework on Blackie and allowing tough tackling captain Amy Cooper, the player best suited for the shackling job, to reside on the bench instead….. ergo Blackie had the freedom of the pitch to orchestrate and inflict punishment on West Ham Ladies from all angles.

I’m trying not to bang on too much about CK’s captain but her work rate and positional sense is something to be admired and aspired to. She appears to saunter around the pitch then boom….. it’s too late..because in the time it took you to blink she’s either scored or performed a crunching tackle or a smart assist. West Ham Ladies must have been aware of her threat but failed to act on it and it took her a mere 3 minutes to be party to CK’s first goal with an oscar winning performance.

CK were awarded a cheap free kick after a foul by Zoepfl. The free kick was directed at Blackie who seemed ambivalent towards the ball as it rolled through her legs to be struck beautifully by ex- West Ham player (yes.. another one) April Bowers into the bottom corner of the net from 25 yards. It was a training ground ‘pièce de résistance’ of a free kick, so good that West Ham’s defence seemed to stop and admire it instead of trying to just stop it.

Four minutes later and with West Ham still having yet to venture out of their own half, CK scored from a corner when Danica Revell (you guessed it another ex- West Ham) headed home.

11 minutes in and it was 3-0. Jay Blackie put in a high through pass to catch the West Ham defence betwixt and between a mannequin challenge and vainly appealing for offside with all the fervour of Tony Adams, whilst Bowers was busy controlling the ball and slotting it past the keeper Kanto to score her second.

West Ham’s media claim is that they are one big family, however in the early phases of the game the players looked like they hardly knew each other. let alone be related, however they managed to steady the (sinking) ship for the next 30minutes but the space Blackie was being afforded was bordering on the ridiculous and in the 40th minute she was allowed to stroll, like she was taking a dog for a walk, unchallenged for 50yards before slotting a pinpoint through ball to the lively Therese Addison who nicked it past Kanto whilst the West Ham defence looked like they had just spotted Medusa in the crowd.

On the stroke of half time a short CK corner found Amy Nash who picked out Blackie to head in at the near post which brought back fond memories of Geoff Hurst and Martin Peters back in the sixties when they patented that move at Upton Park.

It probably didn’t make de Carnys half time talk much easier, but in first half added on time West ham Ladies showed their first bit of class when Zoe Swift sprinted down the right wing to the byline and pulling the ball back to the loitering with intent Molly Peters. Even though the ball was passed slightly behind her she managed to readjust her feet to clip the ball in to home cheers.
Half time seemed abridged which was a blessing as we were all freezing cold, the only things being heated at that time were the toilets and the West Ham dressing room discussions (I imagine).

CK were at it again in the second half and a smart cross found the unmarked April Bowers who tapped in from close range to complete her hat trick. 1-6

The game was becoming a little stretched and ragged when De Carnys made the decision to bring off Peters and replace her with captain Amy Cooper, pushing Swift and Zoepfl further forward, which paid dividends when the two combined, culminating in Zoepfl scoring a superb goal from just outside the area to genuine cheers. I say genuine because if this were a men’s game the cheers would have been ironic. Viva la difference. 2-6

It was becoming a slugfest. It was CK’s turn to land a blow to the Hammers, and it was the other Addison twin Angela to deliver it scoring from an acute angle which maybe keeper Kanto will be unhappy with, being beaten at her near post. Still, West Ham Ladies took the disappointment on the chin and it was their own twin Rosie Kmita who got in on the scoring act to react first to a saved Swift attempt.3-7

Rosie Kmita pounces on the loose ball to score

8 minutes to go. I willed De Carnys to throw on Molly Kmita. The game was up, but we still had a chance of history if both sets of twins were on the pit

ch at the same time. That would have been a great story. And… if she’d have scored it would have had a stat probably never to be repeated of a set of twins on each side and all four scored.
It wasn’t to be.
Spoilt sport.
Literally.

West ham Ladies get a chance to regroup against Coventry Ladies in the cup this Sunday 3rd December. Dogged by injuries West Ham Ladies have limited options at the back and up front, whilst they have an abundance of midfielders.

Against Coventry (without any knowledge of injuries or new signings) I would go with. 4-3-1-2

GK Sindi Kanto – played well last time at Coventry
RB Molly Kmita – needs to play more games
CD Hannah Wheeler and
CD Chenise Austin as only two available unless injuries have cleared up
LB Chantelle Mackie – can play either back position / reliable
DM Amber Stobbs – good tackler and good distribution
LM Rosie Kmita – things happen when she is on the pitch
RM – Ellie Zoepfl – looks class so far
CM – Jasmine Auguste – playing just behind the front two, much more potent powering forward
F – Zoe Swift – has had a hand in all the goals in her first two games
F – Peters/Chong – if Peters unavailable Dayna has the skills to play her role.

Maybe a fourth member who is a tactician would be a good shout. A manager in the true sense of the word.