Where do we start 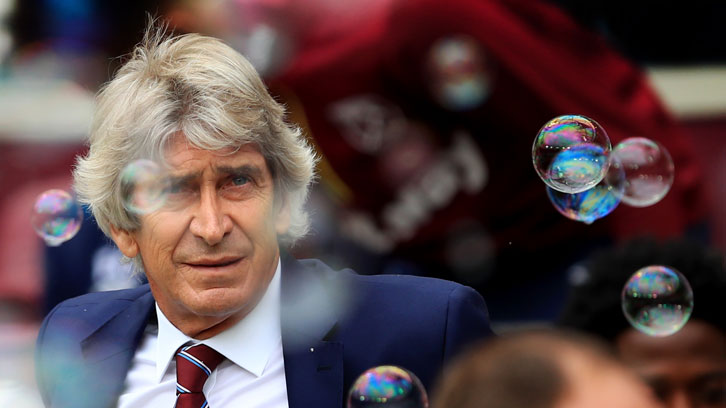 Losing to Burnley, being bullied out of the game and completely played off the pitch – the worrying thing is we could all see it coming, except for maybe Pellegrini!

Burnley, coming off 3 straight defeats and a 3-0 loss to Sheff Utd last weekend, we all knew Dyche would have them fired up and he couldn’t wish for better opponents than us. We’re gutless, clueless tactically and have a goalkeeper who looks like he’s never played in goal before. But back to him later.

Talking of Burnley’s ‘reaction’ to their defeat, where has ours been? I’ve been waiting for that since losing at home to Crystal Palace. The game after that we played Everton who had lost their last 4 games with their manager pretty much certain to be sacked should they fail to beat us, do we turn up and put pressure on them? Of course not, we roll over and gift them their easiest 3 points of the season, 2-0 flattered us massively and could easily have been 6.

Back at ‘home’ next and we play Sheffield United – we should be up for this one given recent history between the 2 clubs right? Nope, a flat 1-1, where our best player was Robert Snodgrass – a player previously sent out on loan and slated by the owners, funny enough he’s the one player who gives his all every week and actually cares about the club. Something we seriously lack.

Time to put these recent results behind us and show a reaction. Newcastle at home – I think if you asked every clubs fans’ in the league they’d say Newcastle were one of the worst teams and favourites for relegation. Missing their best player, Sean Longstaff to suspension, a good opportunity to put things right? Pellegrini made a few changes, most notably playing 62 year old right back Pablo Zabaleta against one of the most pacy wingers in the league, Allan Saint-Maximin. No surprise he had him on toast all game, everyone could see it, why couldn’t the 4th highest paid manager in the league? Truly worrying. 2-0 at half time and once again that flatters us, you could have no complaints if it was 5 or 6. Still waiting for that reaction… maybe we’ll get it after half time? Erm.. 6 minutes in and it’s 3-0, Jonjo Shelvey – a player who seems to be linked with us every transfer window and probably will be until he’s 38 (which is probably when we’ll sign him). In fact that’s another player who the owners have had a publicly slated, telling fans ‘he’s useless’. We got 2 late goals back, but don’t let that kid you, it was a battering. So a 3-2 loss at home and Pellegrini tactically outclassed by Steve Bruce (!) This takes us to the Burnley game where once again another disgraceful performance, no fight shown at all, and as Declan Rice said after the game ‘we were bullied all over the pitch’. Well that is what Burnley do, why did we not prepare for that? You just know Dyche watched our game with Newcastle and saw our ‘goalkeeper’ Roberto couldn’t deal with crosses and actually had a plan. Wood and Barnes had a field day and I bet they couldn’t wait to come up against our frail defence + keeper. Just a reminder we were playing a team that had just lost 3-0 to Sheffield United… we failed to have a shot on target in the first half.

Pellegrini looks like a man with no ideas and he comes across that he’s not even that bothered. Worryingly this was his comment after the Burnley game “I don’t know if it was an unacceptable performance. We conceded the first goal from a corner that was not a corner.’’ If that isn’t an ‘unacceptable performance’ – I don’t know what is. The 4th highest paid manager in the league, we’re being played off the park against teams like Newcastle and Burnley – oh and don’t forget about that 4-0 embarrassment to League One side, Oxford United. This is a man who was managing in China when we appointed him, what was he doing there? Retirement? It certainly looks like it – he lacks passion for the game – Mark Noble even admitted in his column a couple of weeks ago that ‘he doesn’t lose it like Allardyce’ – yeah we can see that, with players strolling around the pitch every week, they know they can get away with it. Surely we need to move on with the times and bring in a young manager who wants to prove himself and not one who is just going through the motions like Pellegrini.

Seeing the likes of Leicester and Wolves pushing for these top 6 places, we’re supposed to be going for, we are worlds apart, they play quick attacking football and I find myself sitting there watching them and I’m so jealous. Note that they still play in football stadiums with capacity around the same as Upton Park was..

Now to the board… Well they’ve leaked (shock) to the BBC this morning that they will ‘give Pellegrini more time’ – which as West Ham fans we all know that means they don’t want to pay the compensation to sack him. Just a reminder that our next 4 games are Spurs, Chelsea, Wolves and Arsenal – are they waiting until we lose those games to make the change just so they can say ‘we gave him time’?  They have promised to keep quiet and not be in the press every week like they used to, well they just can’t help themselves, since that ‘promise’ they leak news to Claret + Hugh on a regular basis and it is so unprofessional. During the transfer window they were patting themselves on the back when Adrian left and we brought in 2 reserve goalkeepers saving a whole lot of wages. Worked out brilliantly that! In recent weeks they’ve stated how disappointed they are with the players like Fornals and Roberto – players that Husillos signed for the club – another great confident boost for those players and deflecting blame to the ‘Director of Football’ – ‘it’s not our fault’ – Sigh. Imagine being Pablo Fornals, a 23 year old, new to the country, new to the premierleague and he’s already being slated by the owners – he must see that sort of thing and feel awful.  Yesterday another leak.. ‘“It’s not as though there is an obvious candidate available” an ‘insider’ told Claret + Hugh – Which sums up their ethos perfectly, always looking for the cheapest option, do you think they are even aware that you can appoint a manager who is currently working at another club? Nothing would surprise me with them to be honest. This ‘we can’t afford it’ stance doesn’t work with me either, people will say we spent a lot in the summer, it was £25m nett spend and saved millions on wages, selling the likes of Hernandez, Perez, Nasri, Carroll, Adrian, Obiang, Byram… the list goes on. Another thing they bragged about at the end of the window.

Anyway I could keep going for hours but lets end with this. When we moved to the London Stadium we were promised a world class team in a world class stadium, the ‘next level’… The reality is we have one of (being kind) the worst stadiums in the country, 16th in the league and being played off the pitch by Newcastle and Burnley. Irons.

One thought on “Where do we start”